I thank my grandparents for my early, visceral connection to the soil.

It is knowledge that lives in our bones no matter how far the generational gap appears to have widened. We should never have lost, and endeavor not to lose communication with the elders who carry it.

There are few words for this knowing in our technological age. There’s certainly no app for it. One word that continues to come to mind for me is legacy. 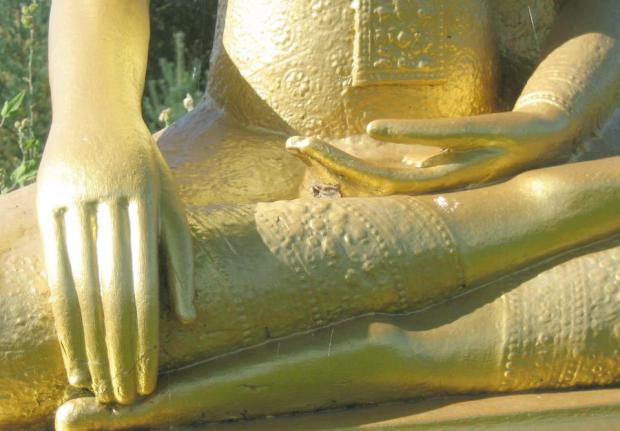 May the earth be your witness.

Truth in its original meaning was “that which sprouts from the earth”, and is to become who you genuinely are. The Buddha touched the fingertips of his right hand to the ground, in what is called bhumisparsha-mudra (earth-touching posture) letting it “be his witness.” In this way he connected with the source of life, his true being, sitting at the immovable spot beneath the central tree of the world.

I walked away from an ‘impossible to obtain’ lifestyle, which I learned was predicated on choosing my own debt slavery and continued soul-loss, to pursue a durable set of living arrangements out of necessity. The wise women I’ve met who have also sought to live in intentional community share similar stories.

I was twice-divorced in the year 2000, a single mom working several part-time jobs. I had no vision of retirement nor was I provided the education as to how to obtain it. Neither of my partners were committed to a future past the next car, vacation, or apartment. I was 33 and I knew in my bones that I’d never work a position with my skillsets for more than a handful of years due to the rapidity of technological advances.

Unless I betrayed my Self again to ‘marry into’ a ‘lifestyle’ I don’t want, or accruing soul-crushing college debt, only to become a shadow of my true self. Invisible. A ghost in the machine.

I find myself fascinated and equally disappointed by the places where “modern” Western culture tantrums continue to present themselves; social norms far removed from a supposedly enlightened age. A.I. reigns and it is certainly not intelligent. Nothing has ever been black and white…or blue and red. All subtlety of language, now lost on the ignorance of a hashtag culture…lowest common denominator programming.

America has no sense of unity outside of the political. That’s a big problem considering what we are inheriting. There’s more money to be made in denial, snark, and censorship than honest conversation, truth and civics. There is no shortage of snake oil…

Cheap, easy to get petroleum is another story. We’ve passed peak. No one is prepared for that reality except those engaged in permaculture.

I ditched hoping that things will change. I decided to change.

I’ve yet to tell the story of how I got here, though I am working on it. On my travels, I met many people of like mind, often at completely different ends of the social spectrum. We still manage to understand basic truths and share the same concerns. We’re able to name American empire, recognize globalization is a failed project as well as the failing natural systems of this planet. Not to mention our humanity crumbling as quickly as our infrastructure.

Our differences are fewer than we’re brainwashed to believe when we understand where we are as a species, not just the current ‘buy now, pay later’ culture and ‘kick the can’ economics of disaster capitalism.

My voice has morphed more times in the last two years than it has in the 7 previous. I maintained the ability to think critically and change my mind when facts are presented. I believe I succeeded in this by ‘cutting my cable cord’ for good back in 2008.

I remember where I was when I made the conscious decision to become a writer. This next chapter will likely be the last one for my book. I made a transition to a place that both honors and matches a depth of feeling about this age. It is considerably different, if not diametrically opposed to the political and ideological conflicts swirling around outside. I’m now part of an intentional permaculture village that feels like a welcome mat at the threshold of the new paradigm.

I met amazing people because I intentionally chose, and set out to become a writer. On that journey, I studied media analysis from and also met Michael C. Ruppert. He introduced me to the word, Permaculture.

Everyone I have met on this road, the gracious invitations, hospitality, and warmth has made me less worried about what the future could look like. I embraced opportunities and learned much about the world, including hard and heavy truths — but most of those are now softened by humility, humor, candor and the many beautiful memories and landscapes of this country I have been blessed to experience. This land is as diverse as the humans that inhabit it.

I refuse and so should you, to be ‘triggered’ by the word America. Many indigenous elders would tell you the same — especially those who fought in WWII to defeat fascism.

Young people of all backgrounds are sorely disconnected from their elders. Elders become ancestors. We should be listening to them, not the talking heads on the idiot box, the suit and tie with a book deal, or anyone with the blue check next to their name…

Have we forgotten that song?

We all face a multitude of uncertainties. Yet, we are all intrinsically connected and diverse as the stars in the night sky. No one person is the same. As no blade of grass is the same.

I’m not talking about melanin or chromosomes here — but the vastness of human beings.

The solutions available to us are multitudinous and as Bill Mollison remarked, those solutions are ’embarrassingly simple’. I have always believed that energy is best focused on solutions. The ones needed now will require us to roll up our sleeves and get our hands in the soil again.

We are in the same boat, America. Be neighborly, tell your stories, seek to understand one another, share some beauty and homegrown food, remember your better nature in the face of uncertainties. This country has weathered a fair amount of storms. Ask elders about them. We cannot stop all storms but we can build resilience against the ones that rage inside us by building community and working together as a human family.

In the coming months, I’ll be working on re-creating a directory that was built by my late friend and mentor, Michael C. Ruppert. It was known as the Lighthouse Directory until it was disbanded after his untimely passing in 2014. The new directory will be named the Lifeboat Directory, after his former radio program.

I’m enlisting the help of one of Mike’s dearest friends, Ali Thomas, who was willed Mike’s Facebook fan page and the book page for Crossing the Rubicon. Ali in turn named me administrator of the former and the latter 3 years ago.

I’ve since become a permanent resident at a permaculture village in Bloomington, Indiana — a town that at one time had it’s own Peak Oil Task Force. I’ve met and am honored to know several of those people, one of whom just won a local election!

This last year, I was hired to update the national website for the Association for Regenerative Culture, a non-profit organization which is expanding its fundraising efforts nationwide. Since I began work on the site, I’ve been consistently reminded of Mike’s vision for the directory he once hosted. I shared this vision with the president and vice president of ARC and have a green light to spearhead this project in Mike’s memory.

We wish to see his legacy live on by tying more lifeboats together.

Announcements about this project will be forthcoming. Please watch these outlets if you are interested in joining this national directory, or if you were previously listed on Mike’s Lighthouse Directory and again wish to share knowledge of permaculture, seed saving, and other resources in your bioregion that help ‘co-create a resilient world’:

We can start in our own back yards, encourage our friends to start in theirs, or encourage your neighborhood to start growing food in an empty lot. It is time to get growing! Build your lifeboats and let’s work to tie them together. Maybe we’ll remember our song and sing it so loud that our ancestors can hear us.