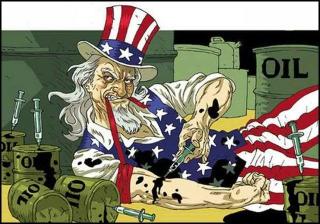 Yes.  The cold war is over.  Uncle Sam is still addicted to that, too.  If you get between him and the last of the oil that is running out, question his actions or exercise your right to free assembly – he’ll bully you and call you a terrorist.  He’s a dangerous, senile junkie who has been strung out by the 1%. He might even throw you in jail or shoot you if you piss him off.  I don’t know if he can be rehabilitated…but I do know that if Americans don’t get their collective shit together, he will take us all off a cliff with him.  No matter what color we are.
Disaster capitalism is an equal opportunity abuser.