February 4, 2013January 5, 2019
contributor Anon De Plume
My favorite commercial was the one where they were trying to sell me that thing that I didn’t need by using Bernay-eseque Freudian psychology, invoking my natural human emotions through the use of allegory and association.
My favorite commercial was the one where they made me laugh and cry while simultaneously cementing my preferences and perception of reality through the use of right brain techniques, which treats incoming data uncritically, processing information in wholes, leading to emotional, rather than logical responses.
My favorite commercial was the one where teams of editors, writers, researchers, and producers colluded to produce a need for something that wasn’t previously there by releasing my body’s own natural opiates (endorphins) as I transitioned into my right hemisphere without any choice, thus becoming completely docile and suggestive.
My favorite commercial was the one where the higher regions of my brain (neo-cortex) was intentionally diminished through the use of hundreds of years of psychological studies and experiments, while at the same time exciting the lower brain functions such as the limbic system (reptile brain) which is unable to distinguish between reality and the simulated reality.
My favorite commercial was the one where I was rendered vulnerable to skewed views of reality written and directed by corporations who could care less about me as long as I am consuming their products and messages without question.
My favorite commercial was the one where I was offered the illusion of escape from my own existence, where driving the right vehicle, drinking the right drink, and owning the right stuff is the dream life that was scripted for me.
I am fully aware that the level of sarcasm in this post is going to fly in the face of a great many things that are close and important to many people (or as I would say was programmed to be so), my only hope is that the level of resentment is so high, that those individuals take the time to disprove me and/or find out for themselves the spell they having been operating under, because it is that awakening journey which reveals the greater insights into these strange days we find ourselves in.
“I watch TV but it doesn’t affect me.”
The average cost of a 30-second advertisement at this year’s Super Bowl was around $4 million. Think about that. By the time you got to this line in this post, a corporation somewhere was willing to pay $4 million dollars. Do you really think they would go to that expense if it wasn’t having an effect? They spend twice as much researching their audiences and finding out precisely what it takes to gain influence over you. If this seems implausible or if this is new to you, then at a minimum take the time to look what I’m suggesting. Google search “Television Mind Control” and you’ll find over 35 million results.
Take your pick and start finding out what is being used against you. Look into the history of it. Look into Bernays and Lippmann. Look into the refresh rates of your televisions and how they put you into an alpha state, the very same suggestive state a hypnotist puts you into. Ever try to get your kids attention when they are watching television? You say their name and nothing. You say it louder and louder until they snap out of it and reply “Huh?” That’s a hypnotic state they are coming out of.
Find out for yourself and for your family.  Here are some quotes to ponder:
“Those who manipulate the organized habits and opinions of the masses constitute an invisible government which is the true ruling power of our country.” ~ Edward Bernays (Assistant to William Paley, founder of CBS) 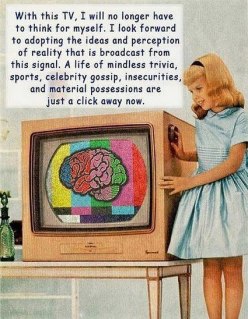 “We are governed, our minds molded, our tastes formed, our ideas suggested, largely by men we have never heard of.” ~ Edward Bernays – Propaganda
“A handful of us determine what will be on the evening news broadcasts, or, for that matter, in the New York Times or Washington Post or Wall Street Journal…. Indeed it is a handful of us with this awesome power….And those [news stories] available to us already have been culled and re-culled by persons far outside our control.” ~ Walter Cronkite
“The media’s the most powerful entity on earth. They have the power to make the innocent guilty and to make the guilty innocent, and that’s power. Because they control the minds of the masses.” ~ Malcolm X 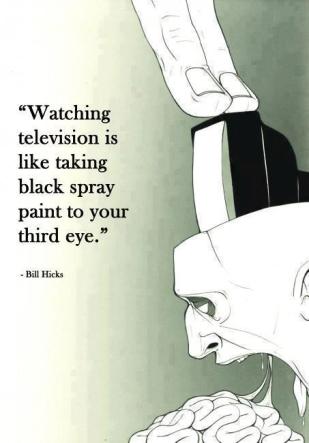 “We need a program of psychosurgery and political control of our society. The purpose is physical control of the mind. Everyone who deviates from the given norm can be surgically mutilated. The individual may think that the most important reality is his own existence, but this is only his personal point of view. This lacks historical perspective. Man does not have the right to develop his own mind. This kind of liberal orientation has great appeal. We must electrically control the brain. Some day armies and generals will be controlled by electrical stimulation of the brain.” ~ Dr. Jose Delgado, MKULTRA
“So long as they (the Proles) continued to work and breed, their other activities were without importance. Left to themselves, like cattle turned loose upon the plains of Argentina, they had reverted to a style of life that appeared to be natural to them, a sort of ancestral pattern…Heavy physical work, the care of home and children, petty quarrels with neighbors, films, football, beer and above all, gambling filled up the horizon of their minds. To keep them in control was not difficult.“ ~ George Orwell, 1984
“Ideas are more powerful than guns. We would not let our enemies have guns, why should we let them have ideas.” ~ Joseph Stalin