As many of you may have heard, Michael C. Ruppert took his own life this past Sunday evening after his radio program The Lifeboat Hour aired on PRN. I sent a short version of this email to him – a busy news analyst – on November 7th of 2013. I kept the long version for a book I’m working on but today I felt inclined to share it. I hope it brings some comfort to those who loved him and respected his work, which meant so much to so many. The Refreshment Center changed significantly since I met him, but it simply wouldn’t have existed at all without his contribution & commitment to high standards in investigative journalism. He was one helluva mentor. RIP Ruppert Bear. ~ Gabrielle Price

A letter to Mike Ruppert

Greetings, Mike – I hope this finds you well. I’ve been incredibly busy on the new homestead after years wandering and trying to find my place. My time here may be short-lived but it is a welcome respite, especially now, and I am making no small plans for this place.

I’m writing in regards to your last radio show with Carloyn Baker and I was very pleased to hear the band Puscifer during the break. I’ve followed Maynard’s career for awhile and I was reminded of a post I made at The Refreshment Center in 2010. It has many more views than most, except for a short screed on anarchy that was juvenile at best when I wrote it.

I wanted to share this post with you personally, rather than on social media because it is personal to me and reminds me of a time when I had sequestered myself away from what Krishnamurti would call our ‘sick society’. I had my longest ‘dark night of the soul’ as it were. There have been others, but this one was the mother of them all. I hope you will entertain my telling a short story.

Long before Occupy, I had read ‘Crossing the Rubicon’ after the BP Disaster and later watched Collapse with a former roommate. During the film, you mentioned ‘finding your tribe and gathering your friends’ – he paused the film and told me he was very glad I was there. I was, too. We made plans and worked well together, sharing data and researching into the wee hours, planning a garden and keeping an eye on events that were just coming to light in Greece.

Unfortunately, our bond of friendship wasn’t as strong as his love of alcohol and need for repetitive fighting. It was traumatic on many levels. My daughter and I had to leave less than two months after I viewed Collapse. From that point, I had to walk away from my former life and friends because they were barely familiar. Stung by this experience before for different reasons [‘cliques’, ‘art snobs’ and ‘self-proclaimed gurus’ among them]…this experience was vastly different. Your work gave me two gifts: My freedom from mental slavery and the realization of why I was left uninspired by this culture. The things I saw and heard being passed off as art, spoke nothing about the world we actually live in. I began the hard work of decolonization of self.

After reading Rubicon, a fine work but I admit it was when I heard your voice in Collapse that the ‘bell rang’ out in my soul. It resonated with startling clarity what I had already known…that everything is connected. I felt this in the ‘inner’ before but was grasping to figure out what the ‘outer’ connection was that drew us all toward this coming shift. I credit you and your teachers for this part of my awakening. Gratitude matters a great deal to me and I’d be not worth my salt without thanking you personally for this foundation-breaking epiphany.

It was this epiphany that compelled me to sequester myself in a hotel room for six months. My daughter moved before this and I was able to make the decision to stay by the grace of friends I met online and knew your work. I had been practicing meditation a few years by that time and what I learned resonated loudly enough for me to take the drastic measure of leaving behind my comfort zone. To turn down the volume, study your methods…learn how to investigate, how to dig, how to pluck out the ice cream from the BS [as you once said]. And I’m quite sure many believed I had lost my mind.

It was also during this time that a long-distance relationship deepened. A man who knew me well and loved me deeply enough to encourage the work I was doing, whether he understood it or not. I’d never experienced this before and it was not for me to question the when or why of the gift, I simply surrendered to it. I found a love – my beloved – who encouraged me to become what I had always wanted to be: a writer. He was far away and I missed him often but I never felt lonely. Love like that made me stronger when many would have quit. I found I was not afraid of solitude. In fact, it was a blessed gift.

My time in what Bukowski may have called a palace [compared to his ‘cold water flats’] to connect more dots and develop my intuition, this following blog post was born. Occupy came soon after and a year later, it was through this rushing wave of awakening that I found myself on your doorstep, interviewing you at your home in Sebastopol, holding my signed copy of Rubicon and leaving a rose quartz in your garden.

There is, of course, so much more to this story. I hope you’ll honor me by reading it one day but please know these experiences taught me that nothing is coincidence to those who trust the path of spirit, brother. Nothing.

Heaven is for those afraid of hell – to be spiritual is to have gone through hell. I believe that as much as I believe I was led to the place I am blessed to be in now. I try to help every soul I meet that carries the heavy load of this ‘sick society’ knowing much of that suffering is illusory. The weight of shackles we do not own but many call a birthright. It’s this idea of ownership that validates the absurd notion that man can rightfully own the earth.

This ‘theater of the absurd’ is older than the Buddha. The earth is older still and we must all be her witness now. Her suffering is our suffering.

An old Swedish proverb that holds true as much as it did when I heard it in my youth, “Shared joy is double joy. Shared sorrow, only half a sorrow.”  Thank you for sharing both and the courage to bear witness to the atrocities of this dying age. It has made me appreciate the beauty of all life more acutely, not just through my camera lens. I recognize the sacredness of simple pleasures. The jewels contained within a simple life.

My friend, such treasures we’ve had all along! We’re all so much richer than this paradigm wants us to know…and I found that’s where my work finally met spirit. What a blessing to get here. Some of us just have to take the long way home, I reckon.

I honor your journey and I wish you peace, Mike. For every envelope you pushed and trail you blazed, I thank you. I’m honored that spirit saw fit for us to meet upon the path.

With love and respect, 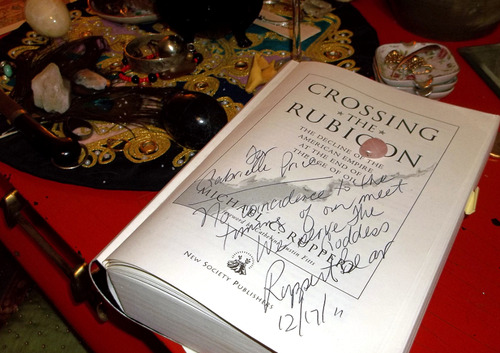