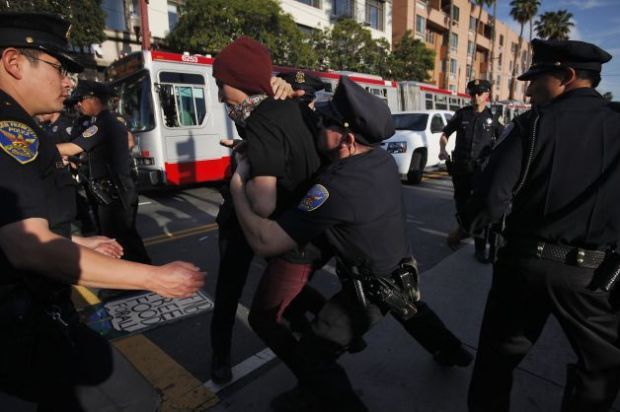 San Francisco Food Not Bombs assaulted & arrested on May Day
May 3, 2014

May Day in San Francisco saw several hundred protesters marching through the Mission district for various causes, including against targeted evictions, and for Alejandro Nieto, who was killed last month in the city by a police officer. Here’s a couple of accounts on the situation:

From San Francisco Food Not Bombs:

Because today’s Mission District May Day Rally and March coincided with San Francisco Food Not Bombs’ weekly Thursday sharing at the Mission/16th Street BART Plaza, some FNB activists brought out some food a little early to share with some marchers that were freely expressing themselves at the intersection of Mission and 16th Streets.

SFPD officers quickly surrounded a group of marchers, refusing to let them voluntarily return from the street to the sidewalk.  The cops arrested about ten people, including some FNB members, and tackled at least one detainee.  They also flipped over our serving table, destroying the rice, bread and guacamole intended for hungry people, and stole the table, a SFFNB sign and some of our serving bowls and utensils.

We want the SFPD to immediately free the arrested people and return our equipment.  The food is forever wasted.

Fortunately, other activists shared the rest of their delicious, prepared food with community members on the BART Plaza at 7PM as usual.

UPDATE:  The SFPD released all except two of the arrested people Thursday night, charging them with various misdemeanors.

Find a FOOD NOT BOMBS chapter near you!