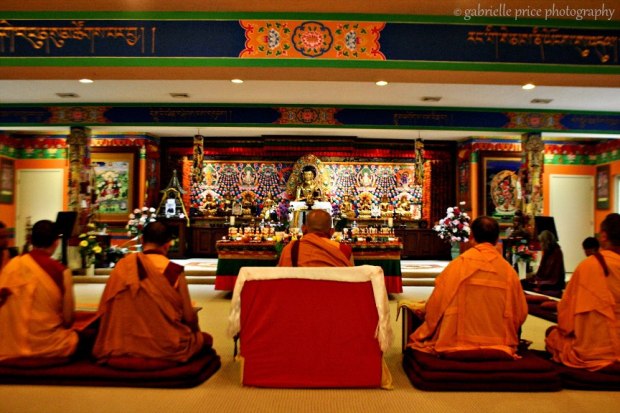 Medicine Buddha Puja at the TMBCC on May 10th

In 2005, His Holiness the Dalai Lama appointed Arjia Rinpoche, a former Abbot of Kumbum Monastery, to take over the directorship of the Tibetan Mongolian Buddhist Cultural Center in Bloomington, Indiana, the city I call home. In 2013 in partnership with the TMBCC, seven monks from Labrang Tashi Kyil Monastery in Dehra Dun, India began touring the United States to teach the Dharma, and educate the public about the culture and religion of Tibet.

This set of photographs captures the Tashi Kyil monks and Arjia Rinpoche reciting the sacred Medicine Buddha during puja at the TMBCC on May 10th. I was very honored to be asked to take these photographs of this most important puja during the run up to the Dalai Lama’s visit to Louisville, KY.

Learn more about Arjia Rinpoche and his work here.

Follow events leading up to His Holiness The Dalai Lama’s visit to Louisville, KY here.

The following is a description of the Medicine Buddha’s Puja from the Tashi Kyil monks. I’m working on a video of this sacred puja to share later.

My thanks to Lisa Morrison, the staff at TMBCC, Arjia Rinpoche and the Tashi Kyil monks who continue to shine their beautiful lights in these historic times of change. Namaste ~ Gabrielle.

Many eons ago, seven bodhisattvas strongly prayed for the temporal and ultimate happiness of all sentient beings, that their names become wish-fulfilling in order to heal both the mental and physical sicknesses and diseases of sentient beings. They vowed that their prayers will be actualized during these degenerate times when the teachings of Shakyamuni Buddha are in decline. When they became enlightened, one of the ten powers of a Buddha is the power of prayer – that means that all the prayers that have been made get fulfilled. As the Buddha’s holy speech is irrevocable, you can wholly trust in their power to quickly grant blessings to help all sentient beings in these degenerate times. They are called the Seven Medicine Buddhas, the main one is `Lapis Buddha of Medicine, King of Light’. Buddha Shakyamuni taught the teachings on the Medicine Buddha, and according to one tradition, is also considered as one of the Medicine Buddhas, and hence the Eight Medicine Buddhas.

The seven Medicine Buddhas manifested in order to pacify the obstacles to the achievement of temporary happiness, liberation and the ultimate happiness of full enlightenment. They are powerful in healing diseases as well as for purification. The Medicine Buddha practice can be used to help purify those who have already died and liberate them from suffering. It is also very powerful in bringing about success, both temporary and ultimate.

The reason why the Medicine Buddha practice brings success is that in the past when the seven Medicine Buddhas were bodhisattvas practicing the path to enlightenment, they promised and made extensive prayers to actualize all the prayers of living beings of the degenerate time when the teachings of Shakyamuni Buddha are in decline. They generated a very strong intention to become enlightened for this reason; this was their motivation for meditating on and actualizing the path.